Large cat 'probably a panther',
After reports in last week's Sutton Guardian of a mysterious "big cat" spotted in the borough, other readers have contacted us. A Cheam resident, who asked to remain anonymous, said she saw a large black cat, resembling a panther, dart across her garden in Fieldsend Road two weeks ago. She said: "I knew it wasn't a fox because they stop and sometimes look at you. Also it was much bigger. "I immediately called my son down, but he was too late to see it and didn't believe me." But Neil Arnold who has been studying large cats in England for 18 years said there was every chance a panther was at large. He said: "These cats were popular as pets during the 1960s and many were released into the wild during the 1970s and 1980s after the introduction of the 1976 Dangerous Wild Animals Act. "I am monitoring around Croydon, Wallington and Purley although this cat could be any of the black leopards - and there are several - within a 70 square mile radius."
Posted by Neil A at 04:43 No comments:

From the SUTTON GUARDIAN:

A Carshalton man is in shock after reportedly seeing a puma race across his back garden last night.
Darren Mason, 37, from Park Avenue, was about to take in some evening hedgehog spotting with his family when the mysterious black cat darted across his lawn at roughly 8.30pm.
"All of a sudden this large dark animal with long legs and a long tail and the size of a Labrador darted across the back of the garden." he said.
"I turned to my partner and said, What the hell was that?', thankfully she saw it too so it wasn't just me.
"The only way I could describe it was like a puma, it was the way it moved, it was so fast, crossing the garden in seconds."
Have you spotted Sutton's big cat? Call the newsdesk on 020 8330 9541.
12:39pm Tuesday 4th September 2007
By Heather Darlington
Posted by Neil A at 11:50 No comments:

London's Metro interviewed cryptozoologist Richard Freeman in 2006 with regards to his ventures looking for real-life dragons, his opinions on ape-men, and his love of zoology...and Doctor Who! 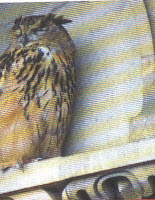 Escaped vultures, out-of-place heron's, and now Eagle owls soaring in the skies above the capital - in the July of 1997 traffic was brought to a standstill around the roads of St. Paul's Cathedral as the London Fire Brigade attempted to rescue a feathery anomaly perched some 130-ft up on the the cathedral's doors. The bird they were attempting to capture was a European Eagle Owl (Bubo bubo) which stood 20 inches tall with a five-feet wingspan.
The bird was all a flutter some five weeks previous but had apparently escaped some five years before, when it was seen near London Zoo, other sightings took place in Camden, Hyde Park and Regent's Park where it attacked a man's dog as he took a stroll!
Unfortunately on the day of 6th July the bird was found dead by office staff who work opposite the cathedral. The bird was laying face down on a ledge, it had died of a bacterial wasting disease, something unusual in birds. The bird had leather falconry anklets on, proving it was once held in captivity.

The strange insect in the car. 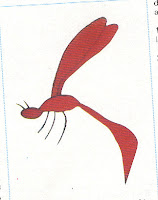 In aletter posted to Fortean Times magazine (March 1998), a William C. Turner wrote of a peculiar encounter with a mysterious insect.
"While driving on the M4 near Junction 4 (Heathrow) in Mid- December (1997 ?) I noticed an insect buzzing around the car. At 70 mph overtaking on the offside lane, it's obviously dangerous to try and swat an agile bug, but I have an aversion to things flying around my head, so I tried to dispatch it. It was reddish, about one inch long, with a similar wingspan, quite fast in flight, aggressive and seemingly tough as I bashed it a couple of times and it still came back at me.
I am familar with ordinary wasps, hornets and horseflies, but this was unlike anything I have seen before. I finally got a good hit in but, when pulling up at traffic lights, I couldn't find a corpse. On getting home I cleared the interiotr of the car hoping to find the body, or some eggs/larvae/chrysalis - in case the car's heater had caused some overwitnering pupae to hatch - but I found nothing. "

Several issues later, a handful of people identified the insect as the Ichneumon Fly (Ophion luteus) also known as the Yellow Ophion, the insect normally appearing as reddish-orange.